Russian-speaking Jews in their 20s and 30s throughout LA embrace and express their Jewish identity in unique ways. Until Alex Grager co-founded RuJuLA, the Los Angeles Russian Jewish Network, no one had been able to reach these young adults in a relatable way. Thanks to a collaborative partnership among The Jewish Federation of Greater Los Angeles, The Jewish Agency for Israel (JAFI), and The Genesis Philanthropy Group (GPG), RuJuLA leads the community in providing meaningful programming to young Russian-speaking Jewish professionals and families with young children, connecting them to their roots and to each other, and building a vibrant community based on a shared identity. The Federation, JAFI, and GPG joined forces to implement the RuJuLA Microgrant Initiative last year in search of new ideas that would further support Russian-speaking Jewish community development and the weaving of Russian-speaking Jews into the LA Jewish community.

The fourth grantee is the “SKIN-4” project, launched by Project AWE, a non-profit organization on a mission to support and explore art of the past, present, and future. SKIN-4 is named for the team of four artists involved in the art-making process: Zhenya Gershman, Jewish Russian-American painter, historian, and co-Founder & President of Project AWE; internationally acclaimed photographer Michele Mattei; Oscar-nominated filmmaker Carlos A. Hurtado; and, of course, the model. Zhenya wondered what would happen if she took portraiture to a new level — transforming the human body into a canvas. The result — art used as a medium to bring memories to life, to expose the “hologram of time by painting portraits of ancestors directly onto the skin of their relatives,” to “experience our legacy as a living timeline where the ancestor becomes yet again an energy alive, breathing in real time,” as Zhenya puts it.

This short video chronicles the innovative process of SKIN-4 and highlights the work Zhenya and her partners are doing to express themselves and inspire others to do the same.

RuJuLA is grateful to our partners: The Jewish Federation of Greater Los Angeles, The Jewish Agency for Israel, and The Genesis Philanthropy Group. 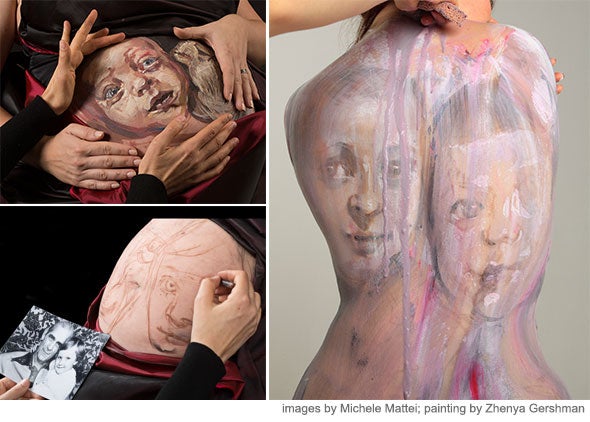