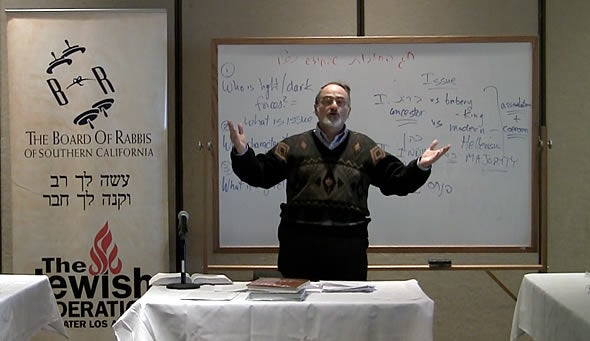 When rabbis gather to learn, who teaches the rabbis? Enter Noam Zion, a longtime favorite and “rock star” in the world of Jewish education. Zion is a fellow at the Shalom Hartman Institute in Jerusalem and is best known for his Passover haggadot and Hanukkah books including “A Different Light: The Big Book of Hanukkah.” On Wednesday, December 7, more than 50 rabbis from across Southern California flocked to Stephen S. Wise Temple to study some new twists on the upcoming Festival of Lights. The beit midrash (house of study) session and luncheon was hosted by Rabbi Eli Herscher and organized by the Board of Rabbis of Southern California/The Jewish Federation in partnership with the Hartman Institute.

“Rabbis have a special bookshelf close to their desks that are for books written by Noam Zion,” said Rabbi Judith HaLevy, president of the Board of Rabbis. “Most people have a copy of his Hanukkah book, and if you don’t—you should.”

Zion, who is working on a new book about the mitzvah of tzedakah and its place in the 21st century, thrilled the large group with his dynamic teaching style, rich source materials and dry wit. He titled the seminar, “The Reinvention of Hanukkah in the 20th Century: A Jewish Cultural Civil War Between Zionists, Liberal American Judaism and Habad – Who Are the Children of Light and Who of Darkness?” His remarks ranged from the Hasmonean kings of ancient Israel to modern-day religious Zionists, Habad in America and the “December dilemma” of the Christmas season.

“Why is Hanukkah so important for American Jews?” he asked the group. “Reform Jews made it a holiday of religious freedom. It’s in our interest as a minority, but it’s more than that – it’s an American ideal.”
Beyond Hanukkah, Zion’s publications include “A Different Night: The Family Participation Haggadah,” “A Night to Remember” haggadah and “A Day Apart: Shabbat at Home.” A Minneapolis native, he holds a Master of Arts in philosophy from Columbia University.

Bearing Witness with March of the Living