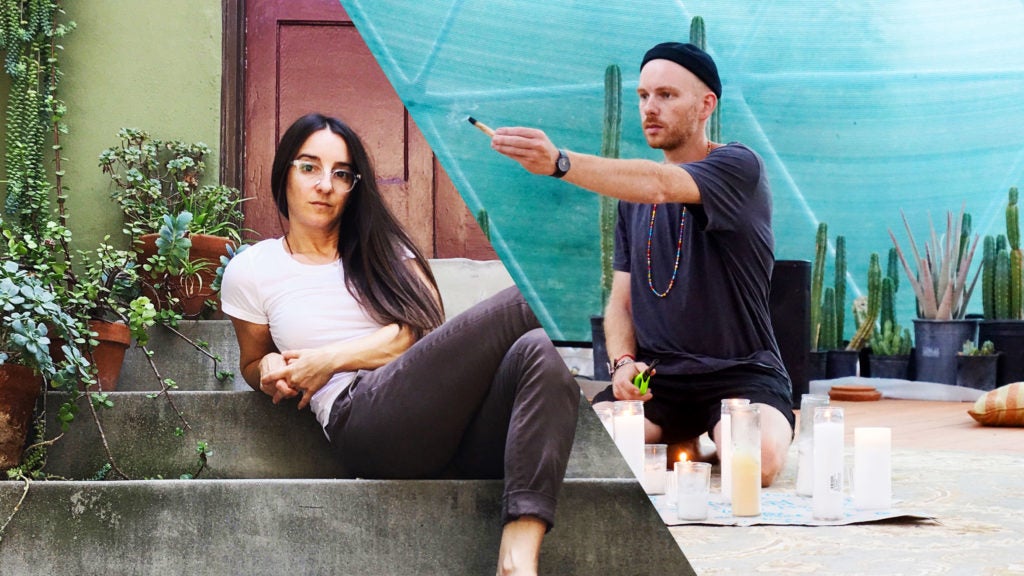 Powered by NuRoots, the Federation’s innovative grassroots initiative engaging young adults, Infinite Light 2018 was the fourth annual citywide celebration of Hanukkah miracles. The 10-day festival had over 40 Hanukkah experiences in over 20 neighborhoods across L.A. From November 30 to December 9, 3,000 young adults connected, were inspired, and experienced an ancient tradition — reimagined. Envisioned, designed, and curated by a blend of local organizations and community members, Infinite Light’s lineup of gatherings highlighted the unique energy of the holiday and reflected Los Angeles’ wildly diverse young adult community. NuRoots community members Miriam Wiener and Ethan Lipsitz opened up to us about their Infinite Light Vocal Cleanse experience in The Outernet, go-to L.A. spots, and Hanukkah traditions and rituals.

What defines Jewish culture or tradition for you?

Ethan: For me, it’s a mix. Taking the stories of Judaism into moments where we celebrate that history. Our traditions engage food, laughter, gathering with family. These intersections where biblical history ties to our actual modern-day rituals defines Jewish culture for me.
Miriam: Yep, that sums it up for me as well, though I would also add that my relationship with Jewish tradition and culture is closely connected to my Jewish identity and how I interact with the world. Experiencing the contrast and the similarities within the melting pot gives me the opportunity to remember where I come from, what my values are, and how I was raised. These opportunities come up in everyday life just by interacting with the world.

What’s your favorite place in L.A., and why?

E: I love my house in Cypress Park. I put a lot of life and love into my house. I love hosting people and spending time in my backyard and making art. I also love the gardens in The Self Realization Center on the top of Mt. Washington. That’s such a special place.
M: I’m a big fan of the walking trail at Griffith Park, the one that starts at the very bottom of Western right when it curves into Los Feliz Blvd. It’s so lush and shaded with trees and overgrown ivy and foliage, and there’s some lovely water features. It’s a really beautiful spot. The Trails Cafe is also a short walk up the hill, so you can grab a coffee and a muffin or a scone and find a quiet bench to sit and do nothing for a few minutes.

Did you have a Bar/Bat Mitzvah? What did it look like?

E: It was a mix of things, but we had toys on all of the tables and afterwards we donated them to local children’s shelters. We also featured Kokopelli, the Native American Deity. I saw a lot of Kokopelli symbolism in the Northeast where I grew up, so we bought belts and printed them with images of Kokopelli dancing on a skateboard playing a flute for all our guests.
M: My Bat Mitzvah service was quite special. I memorized the Torah and haftarah portions, so it was more like a singing performance and not much of a chant. Cantor Goldman was so proud. My party theme was “Mimi Wynn Live!” which was my stage name as a child since I was heavy into the acting thing as a kid. Each table featured a mini-shrine centerpiece of photos of me in costume from one of the many plays I performed in as well as the playbill and other gaudy, tacky decorations. My big entrance to the party was a full dance performance. It was all about me, me, me, me, me. I’d like to believe that I outgrew that.

A piece of advice you would give 13-year-old you?

A past trend that you wish would come back?

E: Rollerblades would be sweet. I wouldn’t be mad about seeing more folks blading around.
M: Mixtapes, the physical cassette. Such a romantic gesture.

What Hanukkah tradition/ritual would you still like to be doing 10 years from now? Why is it meaningful to you?

E: It’s simple, but I really value lighting the Hanukkah candles. Telling the story, lighting them every night, even if I’m alone. There’s something beautiful about watching the candles burn, seeing the light go out, and commemorating the time of year.
M: I really enjoy singing the prayers with my family, especially my mom. She has such a confident singing voice. I like being near her when we are celebrating holidays because she sings loud and proud.

How did you get involved with NuRoots?

E: Originally, way back in the day, I was throwing Shabbat dinners with NuRoots after a trip to Israel and I wanted to get the Shabbat train going. Through that I was introduced to [previous NuRoots Eastside fellow] Elina and then connected with [Eastside fellow] Erika. I’ve been involved with the community for a while.
M: I was brought in by Elina. My first NuRoots experience was a Passover-themed meditation about confronting your inner Pharaoh. I was so floored by such a radical concept coming from a Jewish organization. You mean we’re openly acknowledging that we’re not perfect and that we have things we need to work on? Cool, I can get down with this. I’ve been to a few different events such as “Learn how to make your own bitters for cocktails” or “Come bake some bagels” or “Join us for a new moon gathering with a bunch of women.” The programs are fun, and I always end up having really meaningful conversations with someone new.

What inspired you to co-create an experience for Infinite Light?

E: There is a real relevance to singing and Jewish tradition. I like to write songs about the reality of human beings as light and we share it and spread it and embody it. Hanukkah is a celebration of that reality, which is a big part of the Outernet and the vocal cleanse as well. The story and themes of Hanukkah are so powerful and worth singing and engaging with people — that reminder of our Jewish identity and our shared story of resilience and how it relates to everyone. Stories of staying strong in the face of discouragement, in the face of destruction and war. That’s what this is about.
M: The Outernet and vocal cleanse experience is definitely transferable to many different religions and cultures, but it does feel like we are bringing it back home with the Infinite Light event. We are recognizing past generations and how we are connected to them and who we are today because of these Jewish traditions. Bringing the Outernet and vocal cleanse to Infinite Light is a really nice way to honor that.

What’s one thing you know now about the Jewish community that you wish you knew sooner?

E: Members of the Jewish community look out for and support each other in ways that can turn into effective action — whether that be activism or arts or just lifting people up. The support of the Jewish community is very meaningful.
M: Agreed. That’s the one thing that always impresses me about the Jewish community — the ingrained instinct to continue showing up for each other as well as others. It doesn’t matter where you are in the world. If you walk into a synagogue and say that you are in need, there will be someone there, even if it’s just to sit down and listen to you.

When it comes to latkes, what’s your preferred topping?

E: It used to be ketchup, but I can’t have ketchup anymore, so now it’s sour cream. I’d also be into a pickled ginger, that could be a good look. I am intuitively saying this — I haven’t tried it. Since I can’t eat potatoes on my current diet, I’ll probably make zucchini latkes or cauliflower latkes.
M: You could create a new topping! Maybe host a latke topping taster event! Get a whole group of people together to come up with the next big latke topper! I prefer sour cream as well. Here’s the thing about latkes — I’m happy as long as they’re loaded with sautéed chopped onion.

To learn more and get involved with Federation’s NuRoots, email NuRoots@JewishLA.org.