Los Angeles, CA, July 25, 2017 — Unistream hosted its annual Tedz”l  and Hedy Orden and Family Entrepreneur of the Year Competition on Wednesday, July 19, 2017 in Tel Aviv, Israel. It showcased over 60 business ventures managed by 1,500 teens from all sectors of Israeli society. Attracting businesspeople, entrepreneurs, journalists, ambassadors, and government representatives, the competition marked the culmination of the year’s activities, during which hundreds of teens established and managed startups from inception through business development. Federation leadership and community members traveled to Israel for the event to support the impactful partnership and judge the projects. Rony Zarom, Unistream Founder and Chair, and Batsheva Moshe, Unistream CEO, shared inspirational and empowering remarks, thanking the participants and alumni for their dedication, motivation, and passion.

Earlier this year, The Jewish Federation of Greater Los Angeles and Unistream entered into a strategic and impactful partnership to close socioeconomic gaps in Israel and make the “start-up dream” a reality for all Israeli youth by empowering students from the social and geographic periphery and by giving them the tools to be the next creators, inventors, leaders, and entrepreneurs of the country. The partnership allows Unistream to deepen its impact in an exponential way by expanding its capacity, increasing the number of entrepreneurship centers throughout Israel, broadening its educational curriculum, and supporting the growth of its alumni program. The power of the partnership and Unistream is felt locally, nationally, and globally by directly affecting the lives of the students, families, and communities in Israel and beyond.

The Federation addresses the most central tenets of what it means to care for and strengthen the Jewish community today and for the future. The Federation-Unistream partnership is based on the Federation’s values of identifying and addressing challenges and opportunities in the respective local communities of Los Angeles and Israel — as well as around the world. Unistream’s mission and vision align directly with the Federation’s mission and priorities.

“The Jewish Federation of Greater Los Angeles is excited to embark on this journey of making the start-up dream a reality for all Israeli youth with our partner Unistream. It was an honor for us to partake in the annual Tedz”l  and Hedy Orden Entrepreneur of the Year competition,” said Becky Sobelman-Stern, Federation’s Executive VP & Chief Program Officer. She continued, “We spoke with Unistream participants and alumni, acted as judges for The Social Impact Award, and were inspired to hear their stories and see the impact of this partnership on their lives. The event brought together Israeli youth from all sectors of Israeli society, as well as hundreds of business mentors. Together with Unistream, we will help close socioeconomic gaps in Israel, and turn dreams into reality. We look forward to continuing this partnership to strengthen the future for generations to come.”

This annual competition recognizes the growth and success of Unistream participants and instills motivation, drive, and the opportunity to reach for the stars.

Awards and prizes were given out during the main ceremony, which hosted Mr. Ofir Akunis, Israel’s Minister of Science and Technology, and Mr. Aharon Aharon, CEO of the Israeli Innovation Authority. 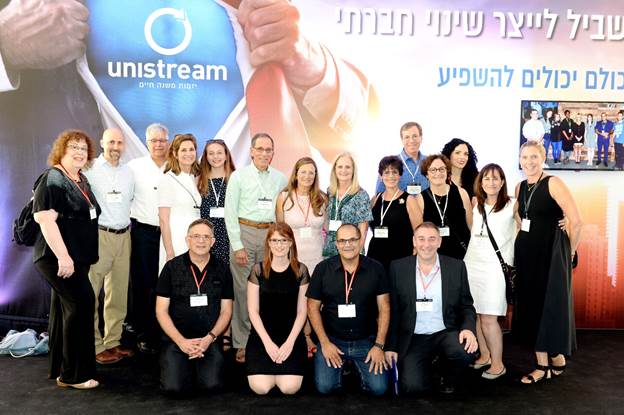 Members of the delegation from The Jewish Federation of Greater Los Angeles with Unistream’s Batsheva Moshe and Rony Zarom. 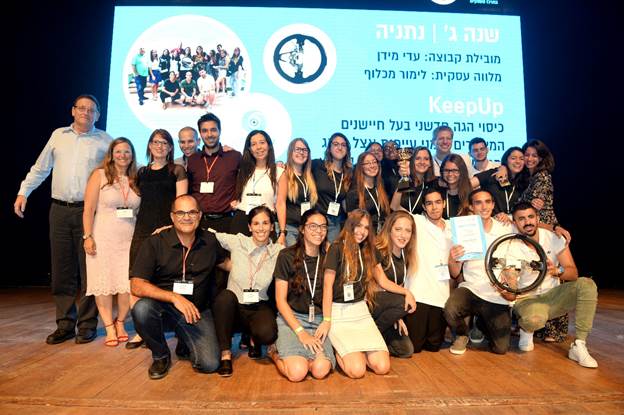 At the Tedz”l  and Hedy Orden and Family Entrepreneur of the Year Competition, Netanya’s Keep Up was awarded first place for the third year Unistream groups. (Pictured with Batsheva Moshe and Rony and Yael Zarom.)