Imagine walking into a hotel with 700 people who grew up watching the same Nu, pogodi! cartoons you did, who don’t have to explain why they celebrate Chanukah and also have a New Year’s tree. People who eat just as many bagels with lox as they do pirozhki. People who think in Russian, speak in English and feel Jewish, who care about Israel and want to make the world a better place.

Last weekend, 700 Russian-speaking Jews didn’t have to imagine this — they lived it, while converging at the Westin Pasadena for Limmud FSU. Limmud FSU is a Jewish learning conference that empowers young adults who are revitalizing Jewish communities and culture in the countries of the Former Soviet Union, as well as in countries with Russian speakers around the world. This annual gathering has taken place in the Former Soviet Union as well as in Israel, several European countries, and on the East Coast, but last weekend was its West Coast premiere.

Sasha Zlobina, Assistant Director of our Federation’s Russian Jewish Community, was one of many hardworking volunteers who helped bring Limmud FSU to Los Angeles, thanks to the support of our Federation. “I’ve never seen 700 Russian Jews before, in the same place at the same time,” she said with pride. “This was the largest event ever for Russian-speaking Jews in L.A.” Attendees weren’t just from L.A.; they came from Orange County, San Diego, San Francisco, New York and Minneapolis, among other cities.

So what happens at Limmud FSU? This year, the conference began on Friday afternoon with informative break-out sessions on topics such as the Diaspora Point of View, featuring infamous Russian journalist Victor Shenderovich, anti-Semitism, and whether or not Jews make good lovers. As the sun dipped into the Pacific, participants were treated to Shabbat dinner and multiple options for welcoming the Sabbath, including a Musical Kabbalat Shabbat featuring the Hampton Synagogue Singers. Sessions continued through 11:15 PM for night owls, with stand-up comedy by Gary Cherkassky, otherwise known by his Vine personality as Baba Fira, continuing through midnight. 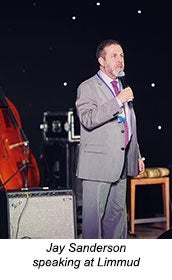 Early birds woke up to yoga or Zumba on Saturday morning, then eased their way into more break-out sessions and panel discussions throughout the weekend— held in either English or Russian to accommodate all attendees. Sessions included such distinguished speakers as Steve Linde, Editor-in-Chief of the Jerusalem Post; Eric Fingerhut, president of Hillel International; Jay Sanderson, our Federation’s President & CEO; Rabbi David Wolpe, renowned lecturer, author and rabbi of Sinai Temple; Natan Sharansky, the formerly imprisoned Soviet-born Israeli politician, activist and Chairman of the Executive of The Jewish Agency for Israel; and Zev Yaroslavsky, former member of the Los Angeles County Board of Supervisors. Participants also had the opportunity to attend talks with a Holocaust survivor and an IDF Lone Soldier.

The main event was a gala dinner and awards ceremony honoring organizations that have gone above and beyond to preserve and revitalize the Russian Jewish community, including The Jewish Federation of Greater Los Angeles and RuJuLA, our Federation’s Russian-speaking Jewish young adult network.  Accepting the award on our Federation’s behalf were Jay Sanderson and Tal Gozani, Senior Vice President of Young Adult Engagement & Leadership Development. Tal has dedicated a significant part of her work to the Russian-speaking Jewish community to help them foster deeper connections to Jewish life and to one another. Our Federation couldn’t be more proud of her efforts.

Although the conference was filled with opportunities for learning, discussion and reflection, there were also many options to just kick back and get to know other attendees, with late night wine parties, concerts, comedy, jam sessions and film screenings.

For those who grew up in Former Soviet Union countries, Limmud FSU was like going back home again for a weekend. For those who don’t remember or weren’t born there, it was a place to create a second home among their Russian-speaking Jewish family around the world.