February is Jewish Disability Awareness and Inclusion Month. As part of our Federation’s commitment to inclusion, every week this month we will feature a blog written by either a member of our community with a disability or their parent, or by a professional working with one of our partner organizations that serves people with special needs.

Professor Louis H. Feldman is the superhero in my life. He taught classics at Yeshiva University for more than 50 years. I was studying history during his later years. At the time, I was mostly interested in modern history, but a friend convinced me to take Feldman’s class in ancient Rome. I liked his class so much I ended up taking his course on Philo and Josephus as well as two years of Latin with him. As you can imagine, there are not many nice Jewish kids lining up to take Latin, so the classes were, shall we say, intimate. For the first year, there were two students. For the second year, we added a girl from Stern, who had come to YU specifically because the school told her that we had a classics department. This made us the only co-ed undergraduate class at YU. 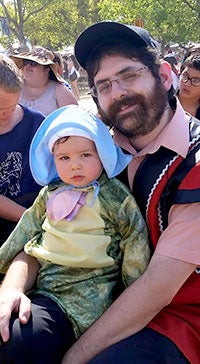 What made Feldman such an incredible teacher was that he combined an encyclopedic knowledge of Greco-Roman, Ancient Jewish and Early Christian History with a warm and humble personality that made him so approachable. He was a little old man shuffling around wearing a baseball cap, a crumpled suit with chalk stains and sneakers. While he brought a stack of index cards with notes, his classes tended to be open-ended affairs in which he would go on side tangents to all sorts of interesting places. In fact, our homework assignments often consisted of us having to e-mail him a question, anything related to the reading. A favorite joke of his was to go over to a student and mention some really obscure ancient writer, talk about how important they were and then ask if the student ever read their books. Hopefully, the student would admit to not having read them. Feldman would respond that he had never read them either as their books are lost. The only reason we know the person existed was because Josephus or some Church Father quoted them.

To give you a sense of how intimidatingly brilliant Feldman was, he wrote a book that gave an overview of just about everything anyone in the twentieth century wrote about Josephus. For papers, he would hand us a list of dozens of possible topics. When we chose a topic, he then handed us a page crammed with sources for us to go through.

As with any great teacher, what Feldman taught went way beyond the formal material on his curriculum. After more than ten years, I have forgotten most of the specifics of what he lectured on. The most important way that Feldman influenced me was in his methodology of closely reading texts as a means of recreating past events. He started with the assumption that we are all fundamentally ignorant of what really happened. For a man as smart as he was, it was amazing how often he acknowledged that he simply could not answer a question due to the lack of evidence. As historians, we have a few texts; our job is to craft a larger narrative by carefully reading those texts, seeking every nuance. History, as presented by Feldman, was something both intellectually rigorous excitingly creative.

I still am Feldman’s student. In fact, we meet regularly to study and talk. Our sessions tend to be a mixture of the New York Times, Rabbi Jonathan Sacks, and Harry Potter and the Philosopher’s Stone in Latin. As my continued weakness in the subtleties of Latin grammar attests, I was never Feldman’s best student (even when I made up 50% of the class). The fact that he continues to tolerate my blunders tells you something about the depth of his patience and commitment to teaching.

Benzion N. Chinn studied history at Yeshiva University and The Ohio State University. He lives in South Pasadena with his wife, Miriam, and their son, Kalman. Benzion works as an academic and special needs tutor. Through ETTA, Benzion was part of a team of ambassadors with special needs who educated the community at large on how to conserve water and energy, and the importance of water and energy conservation. He continues to stay involved in ETTA by attending their social programs and Shabbatonim (weekend retreats) throughout the year.

For more information about Jewish Disability Awareness and Inclusion Month, please contact Miriam Maya, Director, Caring for Jews in Need, at (323) 761-8081 or MMaya@JewishLA.org.