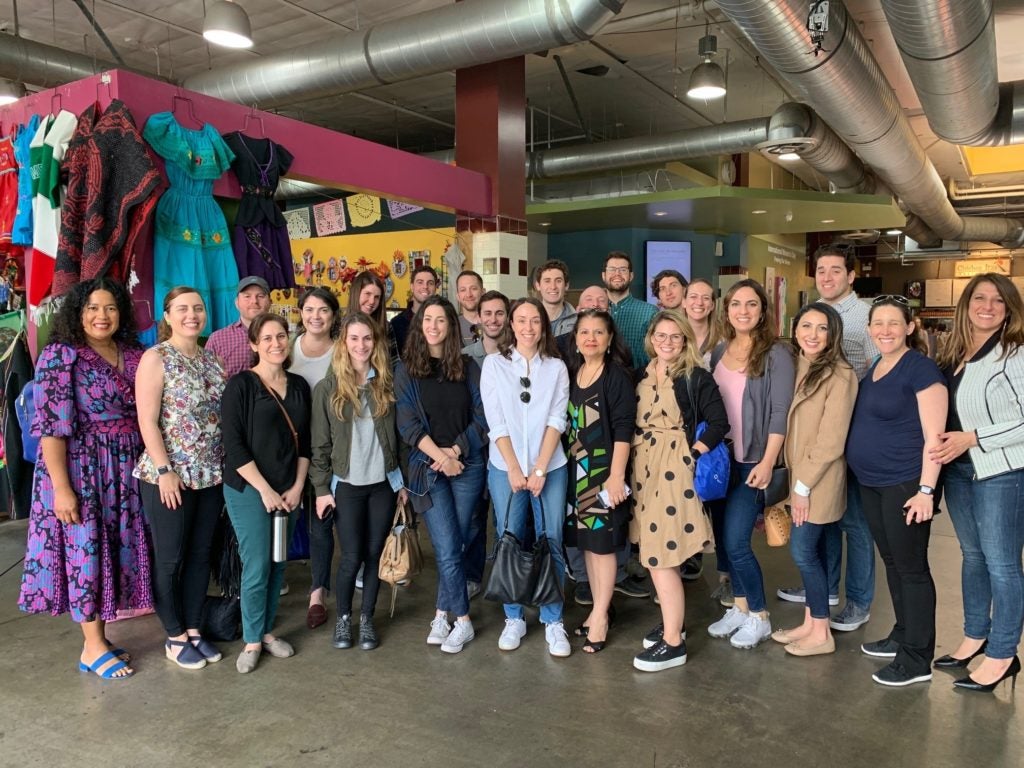 The Rautenberg New Leaders Project (NLP) is a premier program of The Jewish Federation that has trained emerging Jewish civic leaders in Los Angeles for more than 25 years. With a commitment to the Jewish tradition of social responsibility, NLP empowers participants to hone their leadership skills and gain a deep understanding of the diverse fabric of Los Angeles while working with elected, civic, and community leaders to address some of the most critical challenges facing our city.

Marcia Kahnowitz is a current NLP participant. Read more about her experience!

In 2018, Los Angeles International Airport (LAX) became the fourth busiest commercial airport in the world and second busiest in the United States. A record 87.5 million people traveled through LAX last year, and if you’ve ever sat in the horseshoe (as the airport’s main connector is affectionately known) trying to get to your terminal to catch a flight during a busy travel time, you’ve probably felt like you were sitting in traffic with every one of those 87.5 million people.

To address the untenable traffic situation and better connect LAX to other major destination points around Los Angeles, the airport is undergoing a massive overhaul of its ground transportation and arrival/departure structure. This revamp is intended to ease congestion and connect to the LA Metro’s expanding rail network (also undergoing a major expansion), and in general, make traveling to and around Los Angeles County easier and more efficient. All elements of this plan seem like a no-brainer, but, like any massive infrastructure project, changes to LAX and to L.A.’s major modes of transportation bring changes to the communities they inhabit — and while efficiency and accessibility often seem uncontroversial, the increased population density, rising land costs, and changing character of neighborhoods that often accompany these alterations are issues that many residents across Los Angeles struggle with, particularly in the neighborhoods across South L.A.

In April, our Rautenberg New Leaders Project (NLP) cohort met first at LAX for a conversation with LAWA (Los Angeles World Airports) and LA Metro representatives to hear about the airport’s Landside Access Modernization Project (LAMP) and LA Metro’s expansion. This massive project will include, among other things, a newly consolidated rental car center, increased parking capacity, a new access road, and most importantly, an automated people mover that will carry passengers from one end of the airport to the other in 10 minutes. In addition to just sounding cool, the people mover will help ease traffic congestion within the airport terminals and also connect to LA Metro’s expanding Crenshaw line, which is expected to run from LAX through several neighborhoods of South Los Angeles, including Inglewood, Huge Park, and Leimart Park.

After a fascinating conversation about the complexities of overhauling an airport and opening new rail lines through existing neighborhoods, we met with Effie Turnbull Sanders, who heads SLATE-Z (the South Los Angeles Empowerment Zone), and Yadira Arevalo, of the Esperanza Community Housing Corporation at Mercado la Paloma, for a conversation about community building, economic empowerment, and mobility, particularly in the South Los Angeles area. At Mercado la Paloma, the Esperanza Community Housing Corporation has created a thriving local community that invests in and sustains local restaurants, businesses, and shops, which in turn have created even more economic opportunity for the community. SLATE-Z, a partnership of over 50 public, private, and community-based organizations, working together to provide economic opportunity for the residents of South Los Angeles, is, like Esperanza, investing in community businesses and entrepreneurs, but is also actively involved in working with the City and County on increasing safety, accessibility, and affordability of public transportation to provide local residents with the means to travel to educational and employment opportunities in other parts of the city.

For our final stop of the day, we walked around Leimart Park, a historically African-American neighborhood in South Los Angeles. Leimart Park has been a cultural center for L.A.’s African-American community. Sidewalks along Degnan Boulevard, for instance, are covered with plaques depicting the names of African-American cultural icons, and the area has remained predominantly African-American. As costs rise in other parts of the city, however, and with an impending new metro line and station, the demographics have already started to change, and concern about a more significant cultural shift is apparent in walking around the neighborhood’s center square. Leimart Park sits at the other end of LA Metro’s forthcoming Crenshaw line from LAX and will provide direct commuter access both to transit hubs and employment opportunities. As with other neighborhoods that the metro will run through, longtime residents are both eager for the economic opportunity that the train can bring and cautious about the changes to the character of the neighborhood that will inevitably occur.

Despite the inherent challenges in moving an ever-increasing number of people and in SLATE-Z’s goals of investing in South Los Angeles while expanding opportunity for people to move from the area to employment opportunities in others, it’s clear that added access to public transportation through and across L.A. is crucial to its economic growth and opportunity (not to mention a potential traffic reliever)! However, it’s also apparent from experiencing Sunday lunch in the Mercado de Paloma and walking around Leimart Park that the cultural integrity of communities is vital to both their success and maintaining a sense of place and history for longtime residents of South Los Angeles. L.A. is a diverse city made up of many distinct neighborhoods and communities. Our NLP session speakers encouraged us to think about both the benefits and the risks of a more connected Los Angeles. I hope that we as an NLP class will continue to grapple with the question of how growth and transit transform communities and think critically about the benefits of greater connection as well as the potential downsides. Ultimately, I hope we can continue to work together to ensure that L.A.’s continued growth provides opportunities for all of its residents to thrive.

Marcia Kahnowitz recently moved to Los Angeles from New York City, where she lived for 12 years following college.  She co-chaired the Young Lawyer’s Division of UJA Federation of New York.  For several years after law school, Marcia worked in several local government offices on various housing and economic development projects and now works as an attorney on affordable housing transactions on behalf of real estate developers and investors.

To learn more about NLP and to apply, visit YAJewishLA.org/NLP or email NLP@JewishLA.org.