Imagine more than 300 young adults dancing in East Los Angeles to the musical grooves of a trio of women singing in Arabic. This may not sound like a typical Jewish event, but it is indicative of the type of programming that our Federation is offering via the pioneering NuRoots initiative. The band is A-WA, made up of three Israeli sisters with Yemenite roots, and there’s never been anything like them on the global world music scene. Starting from Yemeni-Arabic folk tunes they heard as children, they layer these traditional songs with beats and tunes inspired by electronic dance music, reggae and hip hop.

Growing up in a small village of 30 families in the southern Israeli desert near the Egyptian border, Tair, Liron and Tagel Haim would harmonize together with their parents and siblings, choosing songs from every genre of music. But they particularly loved the old Yemenite tunes they heard from cassettes and the older women in their community, and they decided to bring this music into the 21st century. They launched their career with the viral hit “Habib Galbi,” which racked up over 2.7 million YouTube views and has the honor of being the first Arabic-language song ever to hit No. 1 on the Israeli pop charts.

A-WA’s gig at The Echo in Los Angeles on March 16 was produced by NuRoots, where they found an eager audience who had been waiting years for the band to come to Southern California. For 90 minutes, the Haim sisters and their soulful backing band wowed the crowd and kept everyone on their feet and dancing.

A-WA’s story itself is indicative of the Jewish people, calling attention both to a familiar story of family migration to a new country to make a fresh start, and the remixing of traditional Jewish values and culture by a younger generation. In a typical NuRoots flourish, concertgoers were asked to gather around a world map in order to mark their own families’ roots — a great icebreaker and conversation starter that reflects the diversity of the NuRoots crowd. Further reflecting the mosaic of young Jews that represent NuRoots, the opening act was Joshua Silverstein, an African-American Jewish actor and beatboxer who captivated the crowd with his hypnotic spoken word collages.

A-WA flew straight from the NuRoots gig to a rapturous reception for their first appearance at South by Southwest, an international music, film and interactive media showcase where careers are launched. The Haim sisters will no doubt go on to be global superstars — and thanks to NuRoots, 300 Angelenos will be able to say that they saw them live before they were launched into the stratosphere. 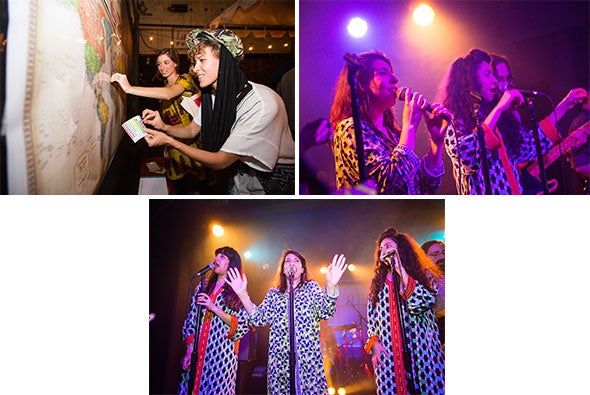